Think like Sherlock Holmes: Time to Look Harder at the Data

Article discussing how regulatory and market changes intensify the need to use data more effectively in securities finance.

It can be very easy to miss the key pattern in a sea of information, unless of course you are Sherlock Holmes. In the adventure of ‘Silver Blaze’, Holmes and Watson are confronted by a multitude of seemingly conclusive evidence about the disappearance of a famous racehorse and the murder of its trainer. However, among the evidence, Holmes notices one data point missed by the police, who had been fixated on more tangible clues such as knives, torn clothing and a bleeding suspect. Holmes meanwhile found out the trainer’s dog had not barked on the night the racehorse had been stolen. The clue that let him unravel the mystery and find the truth. If you have not read the story, I thoroughly recommend it.

A Real Story About Data

Capital markets is another area seemingly drowning in data, but where data presented the wrong way and without sufficient context can quickly lead to the wrong conclusions. In a previous role, I was told by one of my team that the New York trading desk was doing very well because of a sudden growth in trade volumes.

“New York are doing really well, their trade volumes in New York have shot up”

“Really? New York volumes, curious. How did you notice?”

“Their end of day batch is taking longer to complete, so I looked at the volumes and they have exploded.”

I felt a little perplexed, having spent a great deal of time with a trading desk that was far from dynamic, so I looked in their trading books. Their trading books were full of thousands of tiny borrow trades which were opened each day and never closed. I printed out a report and went to see the London based business manager.

“Were you aware of the increase in volumes in the US?”

“Yes I heard they were doing a lot more business, finally pulling their weight.”

“Look at what is making up all the volume.” I said point the list of thousands of miniscule trades.

“Oh, why are they booking all those tiny trades? The cost of settling and processing them is much bigger than the P&L on the trades.”

The New York desk has been adjusting the hedging in their index arbitrage strategy a little too precisely, making no real impact on front office P&L or on the management of risk - but generating huge operational costs. The business manager quickly made the traders clean up the mess in their books and change their booking practices. The number of trades quickly went down without impacting revenues but led to a significant reduction in costs. One of the key characteristics of securities lending compared to other capital markets businesses is that it has always been more front-to-back. What happened in operations or settlements had a significant impact on trading and overall business profitability. In a world where profit margins have been significantly reduced by the decline of dividend related trading the impact of “front-to-back” issues becomes ever more noticeable in the overall profitability. Traditionally the key types of data used related to market data on pricing, shares on loan, dividend rates and internal data on trades and on positions. With the introduction of two new regulations in the European Union (and UK), SFTR (the securities finance transaction regulation) and CSDR (the central securities depository regulation) the need (and opportunity) to look at a wider range of data will become increasingly important. This will provide valuable insights around operational costs, but also the potential costs of non-compliance. In the US market, the rules relating to resolving settlement failures (SEC Rule204 of Regulation SHO) can have a significant impact on profitability. This is the case both directly from fines and indirectly from restrictions on shorting that take effect if the rules are not complied with.

Two related approaches that have been increasingly popular in recent years are:
1. Creating data stores specifically for analysis of data with a business intelligence (BI) tool that allows front office or operations to drill into data and look for patterns.
2. Creating colourful dashboards.
3. Both of these approaches can add a lot of value if properly thought out. But they can also be a very effective way to waste money without generating any return on investment.
4. Data stores combined with BI can result in a great deal of money being wasted if they are created with little consideration given to business context. A trader or an operations manager comes to work each day trying to answer a set of questions, even if those questions are not explicitly written down and asked. The operations manager is trying to understand what is generating his/her costs, why on some days are they getting too close to settlement deadlines and related questions. The trader wants to know who to trade with, who to recall stock from, where to locate stock etc. Simply giving them the tools to drill up and down in a large set of data may get them the answers (or not), eventually. But is not terribly efficient compared to giving them a view on the specific data and metrics that answers their questions.

Dashboards can be even more of a false friend. The example below was created simply to show that something can look scientific from a distance, may be reviewed intently by senior managers on their smart phones for a few minutes each day, but may add no real value at all. This can result from:
1. Irrelevant metrics - where changes in the values cannot ever drive any changes in management decisions
2. Ambiguous metrics – where it is not clear what is being measured
3. Poor quality data – the dashboard may look impressive but the data used may be gathered in manual and highly error prone ways 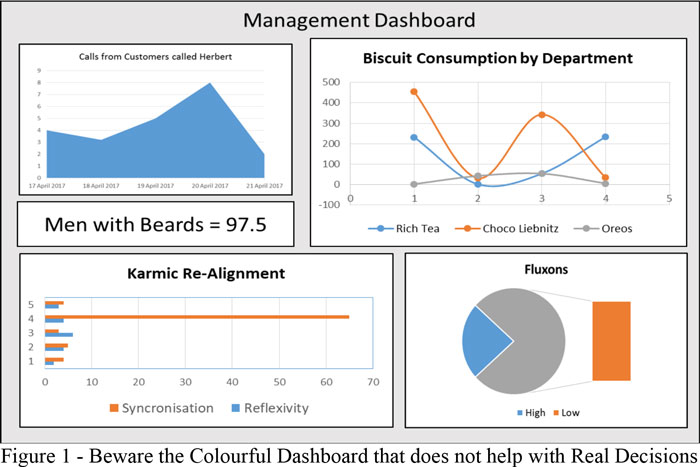 If we think of the questions that need to be answered in securities finance, they ultimately equate to identifying patterns (or changes to patterns) in data. Occasionally the need is to look for a pattern that should have changed when something else changed, but did not. The normal behaviour of the victim’s dog in “Silver Blaze” was to not bark in the company of its owner. However, the theft of a horse from the stables and the violent death of its owner should have caused the pattern of not barking, to change. In our real-life example, the large increase in trade volumes would ordinarily have been associated with an increase in front office P&L.

More commonly, we need to easily identify the patterns that will become ever more important in front to back processing of securities finance transactions. For instance, what is driving settlement failure rates? Fines and Buy-ins under CSDR will soon start eating into securities finance’s increasingly narrow profit margins. Good analytical tools should quickly point to the relative importance of factors such as counterparty, custodian, market, trade type and security type. They should also point towards business processes that urgently need improvement. Broadridge analysis of fails in securities finance, suggest fail rates on returns are up to three times higher than those on the initiation of a trade. Time to look at rationalising and perhaps increasing automation in this key part of life on the trading desk.

Analysing and attempting to resolve SFTR related breaks looks like it will soon merge into a small but costly cottage industry. An industry that will not just impose the cost of new functions but drain the time of the front office in answering queries. However, based on recent experience in regulatory reporting, simply attempting to fix all breaks (even for the fundamental reconciliation of trade and legal entity identifiers) may simply break trading desks because of the volume of issues. A potentially better, analytics driven approach, would be data driven. Data presented in the right way can allow the rapid identification of the root causes of errors. Fixing the problems at source and progressively increasing matching rates may be a better way to please regulators than aiming for perfection, failing and drowning in issues.

You are probably thinking by now, “What analytics framework would have allowed Sherlock to solve the mystery of Silver Blaze even quicker?”

[1] The Memoirs of Sherlock Holmes at Project Gutenberg