The Evolution of Securities Class Action Law: The SEC’s Role in Compensating Investors

Private actors have a significant role in holding corporations accountable for violating securities law, but public enforcement plays a critical role as well. The SEC is the primary government agency that enforces securities laws, and it has many tools to make life difficult for companies that have engaged in fraud.

The Role of the SEC in Securities Regulation 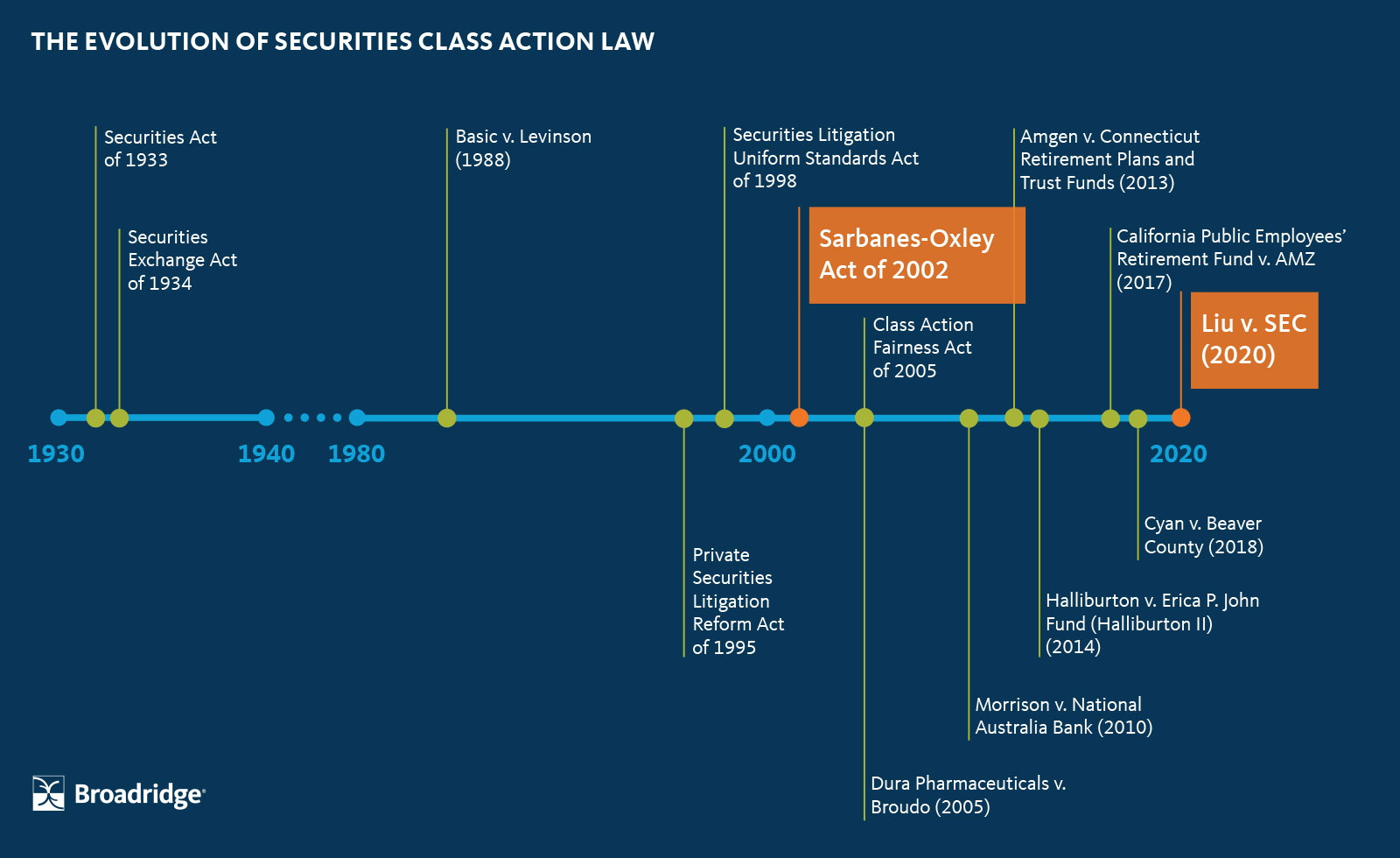 One of the SEC’s oldest tools is disgorgement, which consists of recouping a company’s ill-gotten gains. The SEC has long been able to seek disgorgement by suing corporations in federal court. The Remedies Act of 1990 also gave the SEC the ability to seek disgorgement through administrative proceedings, which are brought before the SEC’s own judges. Disgorgement is an equitable remedy, meaning that it is a flexible tool separate from traditional damages awards. However, it is limited to the amount of money that would return the wrongdoer to the position they would be without the fraud.1

The Remedies Act of 1990 also addressed a concern that disgorgement alone does not penalize companies enough to truly deter their wrongful conduct. After all, disgorgement does not make companies worse off than not committing the fraud to begin with. If a company can gain $20 million by committing an act of fraud, and at worst it might have to give back the $20 million if it is caught by the SEC and held accountable, there may still be a temptation to commit the fraud in hopes of getting away with it. As a result of these concerns, the Remedies Act gave the SEC the ability to seek monetary penalties, both in federal courts and in administrative proceedings. Although there were still restrictions on the amount of penalties that could be sought, the SEC now had significant leeway to impose penalties beyond the amount necessary to recoup ill-gotten gains.

However, the Remedies Act instructed that the penalty money was to be given to the Treasury, and it could not be given back to the victims. Thus, deterrence was prioritized over compensation. Monetary penalties served the purpose of punishing wrongful conduct, but the penalties did not provide relief to investors who had been harmed by the fraud.

In the 1990s, the SEC had powerful tools for deterring misconduct, but it had a limited role in compensating investors who were victims of securities fraud. Congress realized it did not have to choose between deterrence and compensation—it was possible to do both at the same time. This led to the “fair fund” provision of the Sarbanes-Oxley Act of 2002, which authorized the SEC to direct penalty money to injured investors rather than the Treasury.

The Trend Towards Administrative Proceedings

Federal courts are not given the authority to order disgorgement by statute, but, for several decades, disgorgement has been understood to be a form of equitable relief.6 Courts have broad powers to grant equitable relief, which allows them flexibility in deciding how to address an injustice beyond typical damages awards. One example of equitable relief is an injunction, which orders defendants to do something or stop doing something.

It did not take long for the question of what Kokesh meant for the SEC’s ability to disgorge profits when suing in federal court to come before the Supreme Court. In Liu v. SEC, the defendants solicited nearly $27 million in investments in a cancer treatment center, and the SEC brought an action for fraud against them in federal court.8 The SEC sought disgorgement in the full amount that the defendants had raised from investors. The defendants made the argument that, per Kokesh, the disgorgement was punitive in nature and could not be ordered by the court.

First, the disgorgement amount must not exceed the net profits of the wrongdoer, after accounting for "legitimate business expenses." The Court took the view that taking the net profits from the defendant is simply a way to "strip wrongdoers of their ill-gotten gains," but actually setting the defendant back is punitive in nature and exceeds the equitable powers of courts.

Second, the Court strongly suggested that the disgorged money must be returned to investors who were victims of the fraud. The Court said that the money must be used "for the benefit of investors," and dismissed an argument that taking ill-gotten gains and giving them to the Treasury is "for the benefit of investors" merely on the grounds that it serves a purpose of deterrence.

Liu leaves many questions unanswered. In particular, it remains unclear whether disgorgement will continue be available in cases where there are no easily identifiable victims, including insider trading cases.

However, what is clear is that Liu is good for investors who hope to be compensated for securities fraud. The bottom line is that disgorgement in federal court remains in the SEC’s toolbox as a means by which to take money away from corporations that have engaged in fraud. Although disgorgement cannot exceed net profits, it typically has not exceeded net profits anyway. It is also meaningful that the Supreme Court explicitly reinforced the importance of getting money back to investors.