Digital transformation can mean many different things to many different industry stakeholders, but a region’s regulatory and competitive landscapes tend to play a significant role in influencing the direction of travel for firms. Broadridge recently conducted webinars in three key regions across the globe – Asia Pacific, the Americas and EMEA – to examine the digital transformation dynamics in each region’s capital markets. Though some drivers for change are certainly global, there are numerous digitalisation nuances per region.

Many capital markets firms across the globe are dealing with legacy technologies and siloed architectures, as highlighted by the webinar audience poll below. When asked the same question during each webinar, the highest percentage of the audience in each region voted for legacy siloed fintech platforms as their greatest perceived challenge in capital markets. Speakers from each region also highlighted the challenges their institutions are facing because of their ageing infrastructures, including new service and product development bottlenecks, strain on client service and cost containment issues.

Greatest perceived challenges in each region

Comparing the regions, the audience from the Americas seems to be feeling the most pain from legacy technology, which is likely a reflection of the upcoming plans for the US and Canadian markets to move to a shortened settlement cycle. The move will require many firms to replace technology systems that are run on a batch cycle overnight with new systems that are able to scale and can process high volumes on a more real-time or on-demand basis. It will also spark a review of many systems adjacent to securities processing, including payments, corporate actions, securities lending and reconciliation.

In Europe, the introduction of the settlement penalty regime under the Central Securities Depositories Regulation (CSDR) in February 2022 has also thrown a spotlight on post-trade inefficiencies resulting from manual processes and legacy technology. The higher-than-average levels of settlement failures across the European region over the pandemic has also been a point of significant discussion and concern among regulators and industry participants alike over the last 12 months. It is anticipated that further reviews to the CSDR regime, including the introduction of a mandatory buy-in requirement, will compel increased investment by firms in the region to modernise their technology stacks.

In the front office, sell-side firms are facing off against new entrants such as brokers that service the retail trading community, which is placing further pressure on these firms to transform their technology architectures. The competitive threat means firms must become more agile overall and technology is a key enabler.

The Focus on Data and System Rationalisation

The management of data across the trade lifecycle is also a common pain point for firms across the globe and speakers during each of the webinars noted the importance of becoming savvier at managing a firm’s data assets. Speakers during the EMEA webinar explained that there are many potential uses of data that is held within the four walls of an organisation but isn’t currently being mined for information. One speaker suggested that capital markets should look to the retail industry as a beacon of what’s possible when it comes to mining client data from assets such as email and desktop tools.

The bank panellist during the Asia Pacific webinar noted that his firm has developed an enterprise architecture approach to optimise its use of internal and external data. The firm was facing significant future data capacity constraints and the C-suite was also keen for more agility to develop new products and services; hence it took the step to virtualise its server and network. The implementation of an e-commerce model via the complete rebuilding of its enterprise foundations was viewed by the CEO as a transformational investment for the future. The environment is now undergoing further simplification and data is being better supported by the introduction of new application programming interfaces (APIs), widgets and microservices.

Each webinar was opened with an overview of the trends within the market, and the need for common data ontologies to join together data silos from across an organisation was highlighted in the presentation as a significant driver for ongoing investment. In order to benefit from the implementation of next generation technologies such as artificial intelligence (AI), firms must first focus on their data assets across the historical vertical silos related to asset classes and the front-to-back silos due to technical debt. In the longer term, the simplification of these environments via the rationalisation of platforms will enable firms to achieve greater efficiencies around managing their data.

Audience members were polled on their plans to rationalise their vendor relationships during the Asia Pacific webinar and 74% noted that they are moving toward a more consolidated environment. The bank speaker during the webinar noted that although his firm will not be rationalising all systems onto one vendor platform, the focus is nevertheless on consolidating onto best of breed platforms for each asset class.

Are you moving toward technology vendor consolidation for greater efficiency? 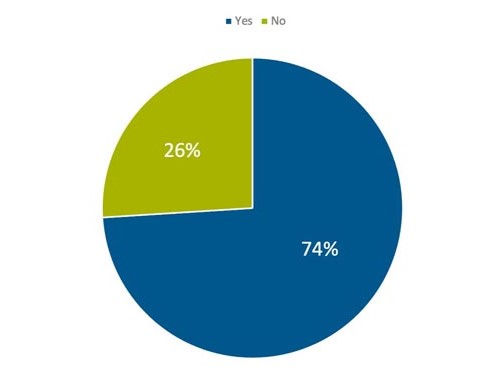 One of the bank speakers during the Americas webinar noted that to this end, it is focused on addressing the vertical silos with its various trading systems and post-trade technologies before it tackles its horizontal silos across trading desks. It is beginning with its high-volume equities systems, and then gradually expanding the focus to the more OTC assets.

Though all regions are displaying an interest in the potential for next generation technologies, not all are at exactly the same level of adoption. During the Americas webinar, audience members were polled on their perception of the impact of AI adoption on trading and operations in the near future (see below). Opinion was split on where and how humans working in capital markets will be impacted, with 45% indicating that they thought AI would augment rather than replace staff, whereas 34% believed it would replace them in multiple areas from front to back office.

Do you expect AI to replace humans in any areas of capital markets in the near future? 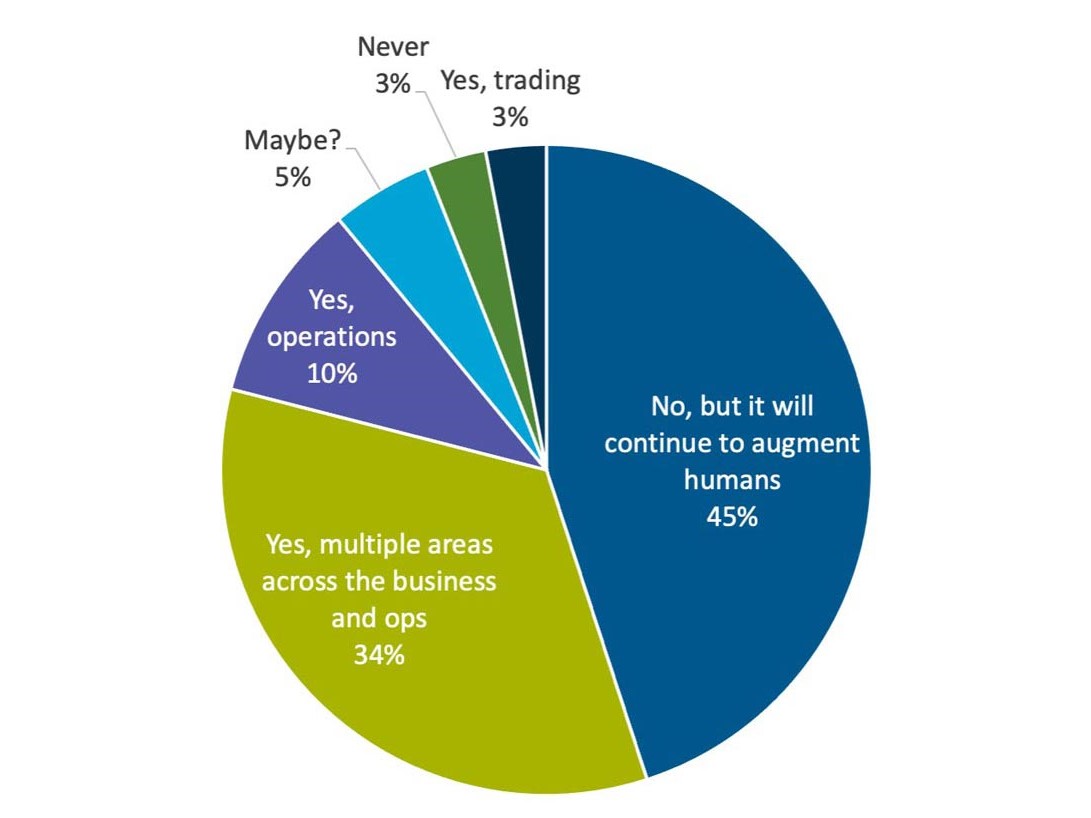 Regardless of which audience contingent is correct, AI is potentially a game-changer for firms seeking to improve their levels of automation and maximise the efficiency of their staff. As noted by the panellists during the Americas webinar, the key to surviving in a much more competitive landscape is keeping staff focused on value-additive tasks rather than unnecessarily manual processes. Furthermore, AI can play a role in speeding up the decision-making process by presenting information to traders or operations teams at the right point in time. However, usage of AI must be carefully governed and explainable internally, and externally to both clients and regulators.

The sheer volume of data sources with which firms must contend means that it isn’t possible for any one human to parse through the information and make informed trading decisions, agreed bank panellists. Competitive edge can be determined by how quickly firms can make sense of new data sets and apply predictive analytics to existing data to understand potential future outcomes in the market.

Another key theme within the EMEA and Americas webinars in particular was the need for the industry to address regulatory operational resilience concerns. US and European regulators have both been very vocal about topics such as cybersecurity and operational risk reduction over the last couple of years. The manner in which a firm operates now needs to be viewed holistically and any areas of operational risk must be addressed to meet these regulatory requirements.

The introduction of the Digital Operational Resilience Act (DORA) in Europe heralds this new regulatory crackdown on both cyber-hygiene practices and operational governance practices. Firms need to think differently about planning for service availability, particularly given the example of the last few years during the pandemic. Audience members during the European webinar indicated that they believe the impact of DORA will be felt sooner rather than later (see below).

How soon do you think operations resilience requirements will impact your firm's operating model? 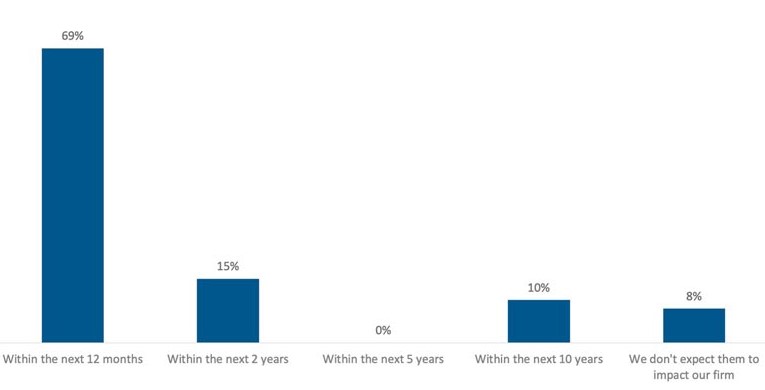 One of the speakers explained that the impact of DORA is already being felt at most large European financial institutions as they evaluate their end-to-end processes and try to understand the impacts of a wide range of possible events. Top-tier banks may have the resources to throw at these projects, but many smaller firms will further be compelled to adopt cloud-based solutions in order to meet the business continuity and security obligations. They will rely on their vendor partners to help them build more resilient operations and reduce risk as much as possible by automating key processes. The panel agreed that these new requirements are in keeping with good business practices, given the increase in threats across the spectrum from hackers to climate risk and weather related incidents that can derail a firm’s core operations quickly.

Digital Transformation is a Continuous Journey

Some firms are further along their planned digital transformation journeys than others, but many appreciate that there may not be an end point in sight for technology change. Just under half of the audience members polled during the European webinar noted that these projects may never end as client requirements, market conditions and technologies change over time.

How long does your firm's current digital transformation programme run for?

The transformation of the front office may have begun in the equities space a long time ago, but that has expanded over time into many other asset classes and further back into the post-trade realm. Technology already has and will continue to play a significant role in making capital markets firms more efficient, resilient and well-placed for the future. Digital transformation projects will adapt and change as the conditions for competitive success within the market change. We’re all on this journey together.