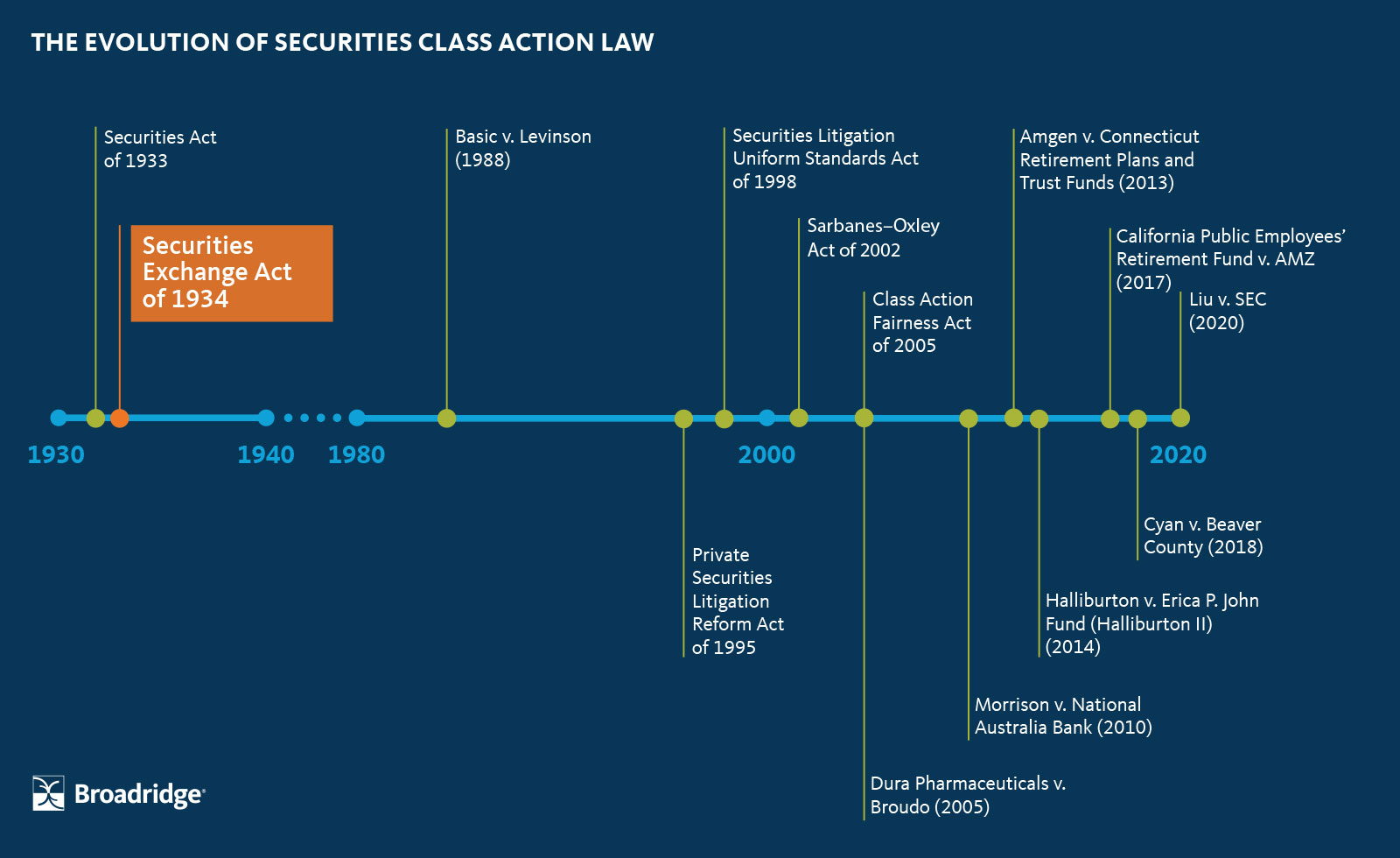 The 1933 Act was an important first step in securities law, as it enforced transparency when companies issue securities. However, it was immediately clear that as a tool for ensuring that the public and the market always operated with accurate information, the 1933 Act had significant gaps.

Issuing a security is a one-time event, and securities are thereafter repeatedly traded on the stock market. Companies could still mislead investors in ways that would encourage the purchase or sale of securities, affecting stock prices—and the volatility of secondhand trading of securities in the stock market was widely understood to have been one of the major factors that led the Great Depression. President Roosevelt and the Democratic Congress recognized that they needed to do more to fulfill their promise of reforming our financial markets.

This led Congress to pass the Securities Exchange Act of 1934. Section 10(b) of the 1934 Act prohibited companies from using any “manipulative or deceptive” practices that lead investors to buy or sell securities on the open market, and provided a private right of action so that investors who have been misled by corporations can sue. This broad approach contrasts with the 1933 Act, which only applies to false or misleading registration statements, and only to shares that are offered in connection with those registration statements.

Given the complicated and dynamic nature of the financial industry, Congress also recognized that it needed a government agency to enforce its new securities regulations and make sure they stayed up to date. Therefore, the 1934 Act also created the Securities and Exchange Commission (SEC) as an independent federal agency responsible for enforcing securities laws. The 1934 Act also granted the SEC authority to specify what “manipulative or deceptive” practices are subject to the prohibitions of Section 10(b).

Almost a decade later, in 1942, the SEC promulgated Rule 10b-5 to help enforce the 1934 Act and elaborate on what “manipulative and deceptive” practices are prohibited under Section 10(b). Naturally, Rule 10b-5 prohibits false statements. More interestingly, Rule 10b-5 also prohibits statements that omit an important fact that would prevent them from being misleading, regardless of whether the statements are technically true. This means that corporations not only have to tell the truth, but they also must make sure their statements do not have any omissions that make the statements misleading—another key expansion of corporate liability, and one that played a very significant role in securities litigation in the following decades.

Section 10(b) and Rule 10b-5 were powerful tools for holding corporations accountable, but it was a long time before they became the foundation of securities class actions. At first, Rule 10b-5 was essentially just a way for certain investors to sue for fraud, and it was understood that investors had to show they had a contractual relationship with the defendant and actually relied on the defendant’s misleading statements in making investment decisions. In the 1960s, courts began to allow investors to sue without having a contractual relationship with the defendant, but they still required proof of actual reliance on the misrepresentations or omissions1.

A Rule Against Insider Trading

Rule 10b-5 also provided a private right of action for investors to sue for corporate insider trading. Insider trading is another important aspect of securities class action law, and each year a number of securities fraud class actions include insider trading claims. One example is a case against Bausch Health, formerly known as Valeant Pharmaceuticals, which recently reached a $1.2 billion settlement after several years of vigorous litigation4. The complaint in this case included an insider trading allegation, which claimed that a group of insiders at the company timed the sale of their shares to capitalize on a market price that they knew had been artificially inflated by misleading statements5.