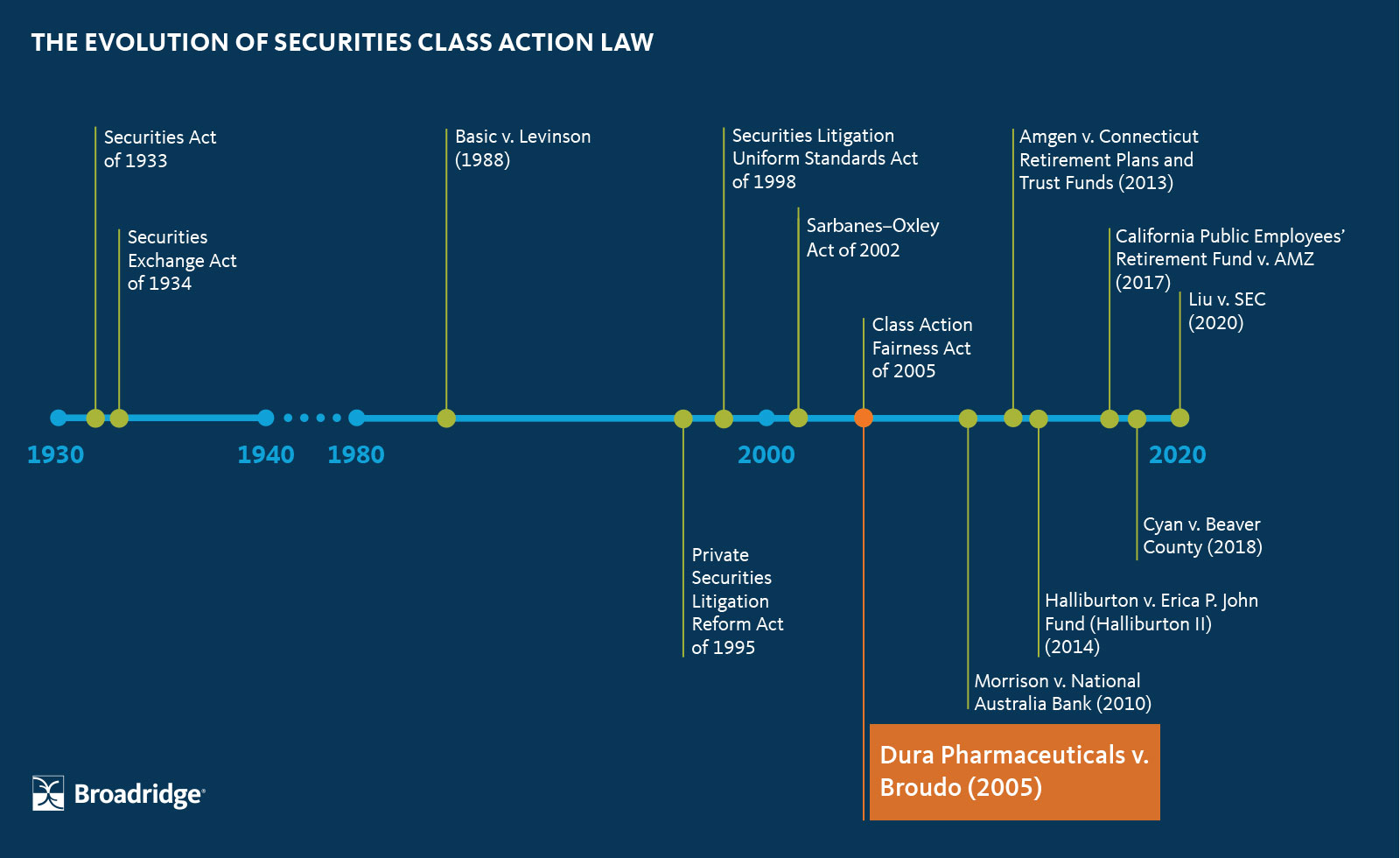 Before Basic v. Levinson, the most challenging part of Rule 10b-5 class actions was establishing reliance—showing that members of a class had relied on a material misrepresentation when buying or selling a security. After Basic, establishing reliance was much less of an obstacle, as the fraud on the market theory usually allowed a presumption that investors had relied on a misrepresentation simply by relying on the integrity of the market price. However, reliance alone was not enough to establish liability.

Plaintiffs also had to establish that members of the class had suffered an economic loss. If investors had relied on a misrepresentation but did not actually lose money, they had nothing to sue over. After all, it is possible that a corporation said something misleading and potentially material to the price of the security but, by the time the truth came out, other news had neutralized the concerns of investors and there was ultimately no impact on the stock price.

In practice, loss causation is quite challenging to prove. The stock market is often volatile and rapidly incorporates information from many sources at the same time, so it can be difficult to isolate how much a specific event affected a stock price.

After Basic, many plaintiffs began to recruit economists to help prove loss causation. Economists used a statistical tool called an event study, which can estimate the degree to which a specific event had changed a stock price by comparing the subsequent change in the stock price to normal fluctuations of that stock price and trends in the stock market as a whole. Defendants also began to recruit economists in an effort to rebut the arguments of plaintiffs. This led to an arms race in who could provide the best expert testimony on very technical questions.

In the 1990s and early 2000s, plaintiffs aggressively argued that both of the above scenarios should support a finding of loss causation. In particular, plaintiffs argued that they met their burden of proving loss causation whenever a company made a misleading statement that was then followed by any disclosure or development that had a negative impact on the stock price, even if that disclosure or development was not related to the initial misleading statement.

This was the situation in Dura Pharmaceuticals v. Broudo (2005).1 Dura Pharmaceuticals had stated that the FDA would approve a new spray device Dura had developed. After lower than expected earnings, Dura’s share prices lost half their value. It was only eight months afterwards that Dura announced that the FDA would not approve its device, and this caused only a brief impact on the stock market price. A class action was filed based on the loss investors suffered when they bought shares after the false statements about FDA approval and sold them after the low earnings were announced—long before the truth came out about FDA approval.

The Supreme Court unanimously held that loss causation was not established simply based on an inflated price. In other words, Scenario 2 generally does not lead to liability. The Court reasoned that “as a matter of pure logic,” the plaintiff has not yet suffered any loss at the time they purchased the security, so one had to look at what had caused the price to drop in determining whether there was loss causation. The Court also argued that this more narrow interpretation is consistent with the objectives of securities laws, including the 1934 Act and PSLRA, which were only intended to create liability to the extent that investors can recover losses that were caused by misrepresentations.

The effect of Dura has been to rein in some of the more speculative claims in securities class actions. Now, plaintiffs must both show that they lost money and point out how the misrepresentations were linked to the loss, which typically means they have to show that there was a drop in the stock market price when the truth came out. Thus, Dura has continued the trend started by the PSLRA and SLUSA of raising the bar for securities class actions.